The Yampa Valley was the summer hunting grounds of the Ute Indians for hundreds of years. The Yampatika Ute and Arapaho tribes also visited the area for its mineral or “medicine” springs considered sacred places of physical and spiritual healing.

The name of Steamboat Springs is thought to have originated around the early 1800s when French trappers thought they heard the chugging sound of a steamboat’s steam engine. The sound turned out to be a natural mineral spring, to be named the Steamboat Spring. 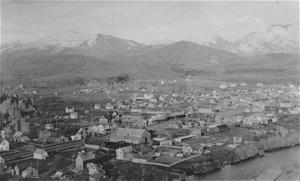 In 1874, James Crawford ventured into the Yampa Valley seeking a homestead site. Impressed by the region’s mineral waters, he built a cabin near present day Iron Spring and a log shelter over the nearby hot springs. Crawford spent a few of his winters in Boulder, Colorado where he persuaded several prominent businessmen to join him in organizing the Steamboat Springs Townsite Company in 1884.

By 1885, five other families had settled in the area including a newspaperman, James Hoyle, who brought his printing press and publication of the Steamboat Pilot began that same year. The area began to develop slowly, but increased slightly when a sawmill was established in 1883.

In 1900, the town was incorporated with James Crawford as the first mayor. By 1902, the town had 3 hotels, 3 livery stables, 3 banks, 4 general stores, 2 meat markets, and other businesses including the Steamboat Springs Service Company. This company was the community’s first electric utility company.

In 1909, the railroad arrived, which sparked a boom for the commercial industry in Steamboat Springs. Ranching was the primary industry of the valley and the cattle ranchers turned the new railroad depot into one of the largest cattle shipping centers of the West. Consequently, the construction of the railroad silenced the Steamboat Spring’s chugging noise forever.

Numerous passengers began arriving on the railroad to visit the scenic area and the natural mineral springs. In the early 1910s, Norwegian Carl Howelsen arrived and brought ski jumping to the area and established skiing as a sport. Tourists now also began to visit the area for skiing and a few avid skiers began to look for broader areas of terrain. 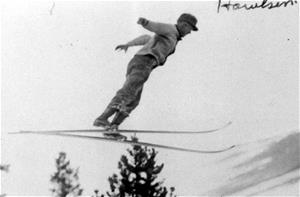 Photo by: Tread of Pioneers

In the 1960s, Storm Mountain was developed as a resort ski mountain led by James Temple. The mountain was later named Mt. Werner in memory of local skier and Olympian Buddy Werner who was tragically killed in an avalanche.

For more information about the rich history and heritage of the Steamboat Springs area, check out the Tread of Pioneers Museum.